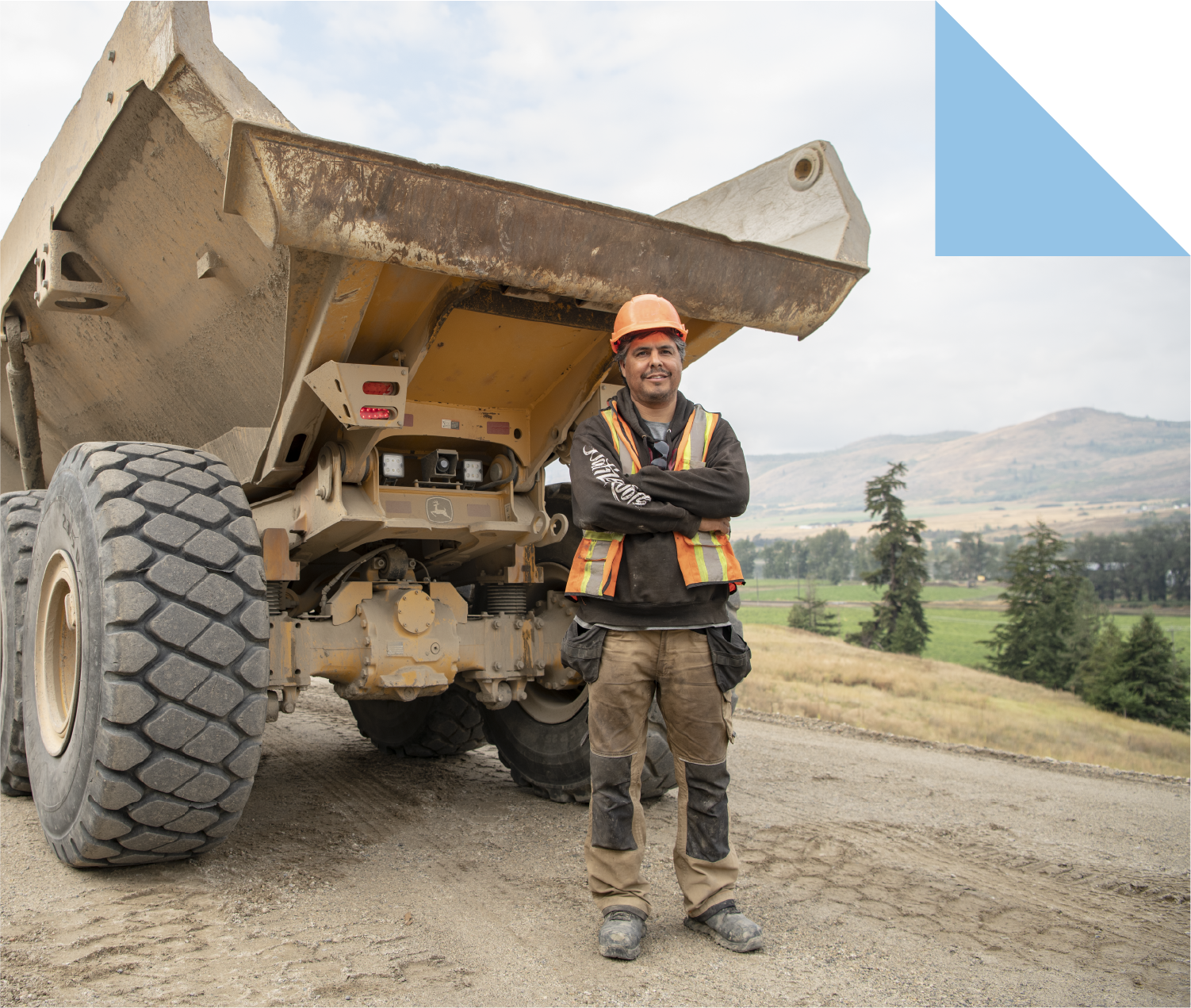 Andy is a member of the Adams Lake Band and an Operator on the Chase West project.

BCIB is the progressive construction employer on some of British Columbia’s largest infrastructure projects.

We work with contractors, unions, and project owners to recruit and retain a diverse skilled construction trades workforce. Together, we are paving the way to good-paying, career-building jobs, and a stronger economy for all British Columbians.

Through the Province’s Community Benefits Agreement (CBA), BCIB hires underrepresented workers, including Indigenous peoples, women, 2SLGBTQ+ people, and locals. We also connect workers with training and apprenticeships to open doors to careers in the trades.

BCIB and its partners in industry and labour are building up a respectful and qualified workforce that will benefit BC’s construction sector for years to come.

BUILDING OPPORTUNITY AND A HUMAN LEGACY

In the past year, BCIB has made strides towards building the robust skilled workforce BC needs, now and in the future. Growing and diversifying our workforce is critical to shoring up the province’s vital construction industry, helping the sector face the skilled labour shortage that will grow as experienced tradespeople retire in the coming years. BCIB promotes inclusivity and drives productivity. We are building opportunity for people, communities and companies in BC.

Supporting the careers for traditionally underrepresented workers—Indigenous peoples, women, locals, 2SLGBTQ+ workers, and others—helps us expand the workforce. Retaining this new talent is just as important. To help keep workers onsite, BCIB has developed our Respectful Onsite Initiative (ROI). The training program helps employees and contractors better understand and support one another, which leads to increased productivity and decreased onsite tension.

In Fiscal 2021/22, BCIB worked with contractors, unions, and community groups to employ more than 1,200 people on Community Benefits Agreement projects.

The first CBA project, the Illecillewaet Brake Check, was completed this past Fiscal year.  On that project:

CBA workers represent the next generation of skilled construction tradespeople in our province. In Fiscal 2021/22, they were deployed to eight projects, and more are on the way.

BCIB has not made progress alone. We work closely with government project owners, contractors, unions, and our workers to meet our shared goals. Together, we’re helping the Province’s infrastructure investment create roads and bridges, as well as a long-lasting human legacy. This report tells the stories of some of the people who are working onsite, with contractors, to build that legacy. 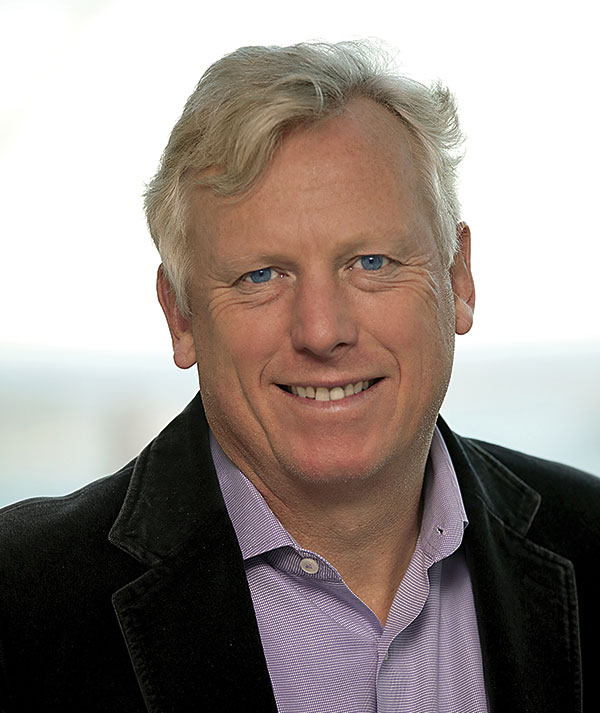 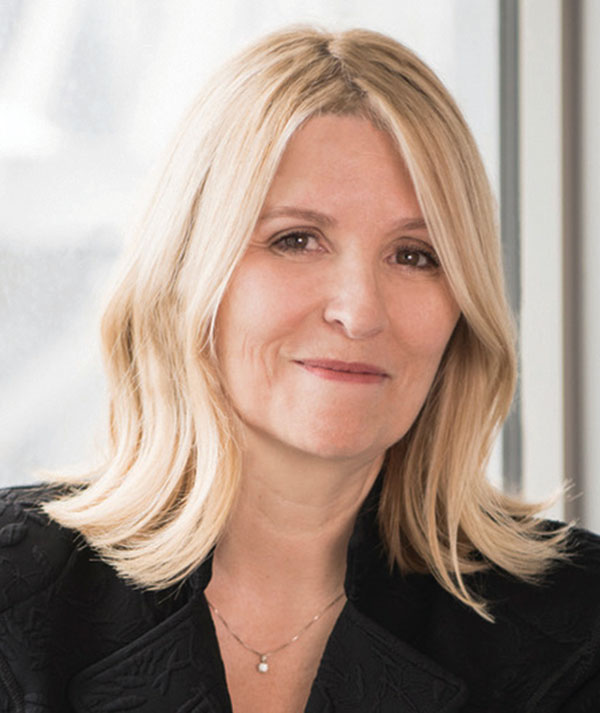 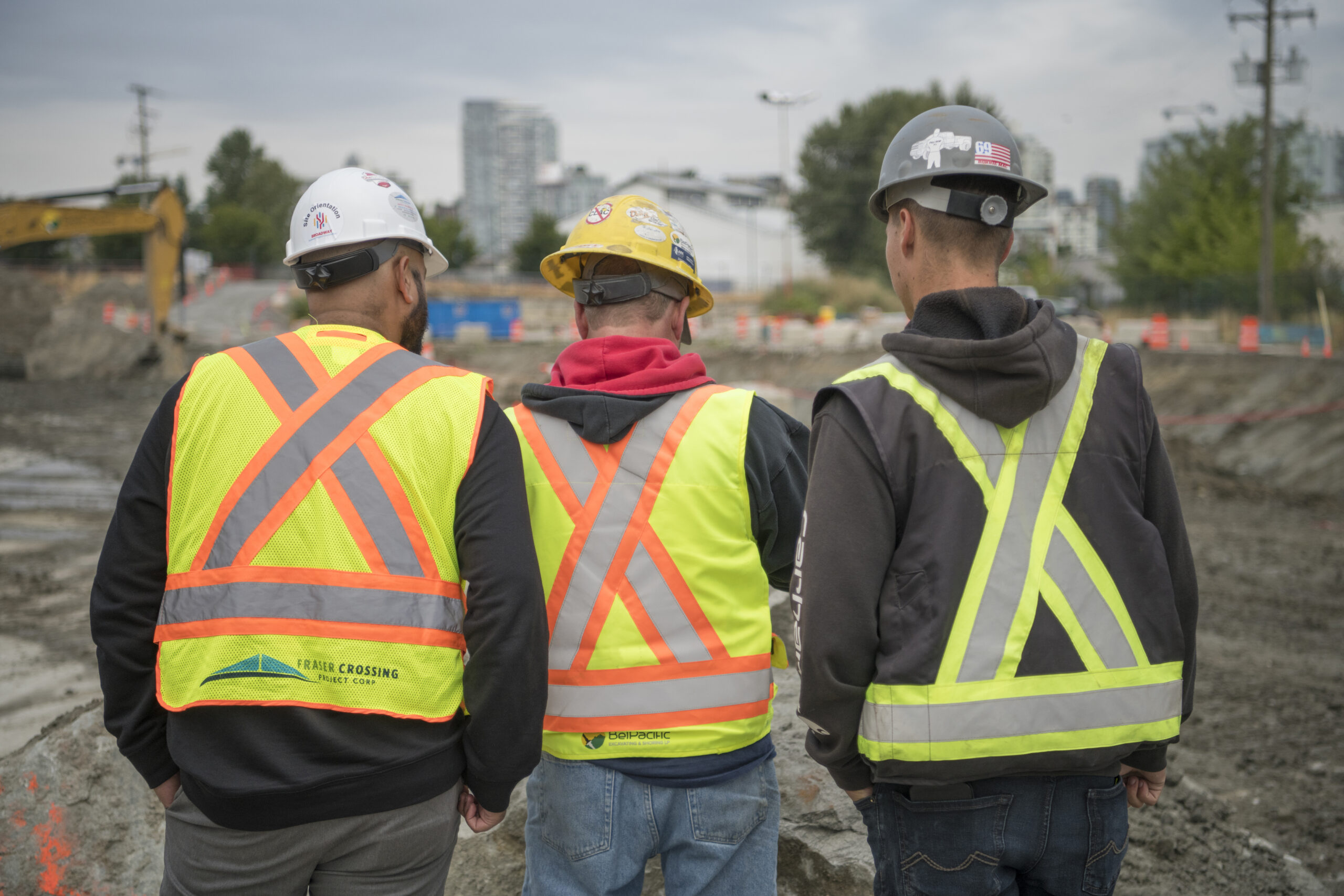 WORKERS ON THE BROADWAY SUBWAY PROJECT

I’m pleased to collaborate with BCIB and the Musqueam, Squamish, and Tsleil-Waututh Nations to increase employment and training opportunities for Indigenous peoples on the Broadway Subway Project. Together we’re making the construction workplace more culturally inclusive and a place where Indigenous peoples can choose to come and grow their careers.”

The City of Surrey is excited to work with BC Infrastructure Benefits on Community Benefits Agreement projects such as the Pattullo Bridge Replacement. Together, we aim to increase inclusive employment opportunities for Surrey residents, and we thank BCIB for their continued collaboration in helping our residents build their careers close to home.” 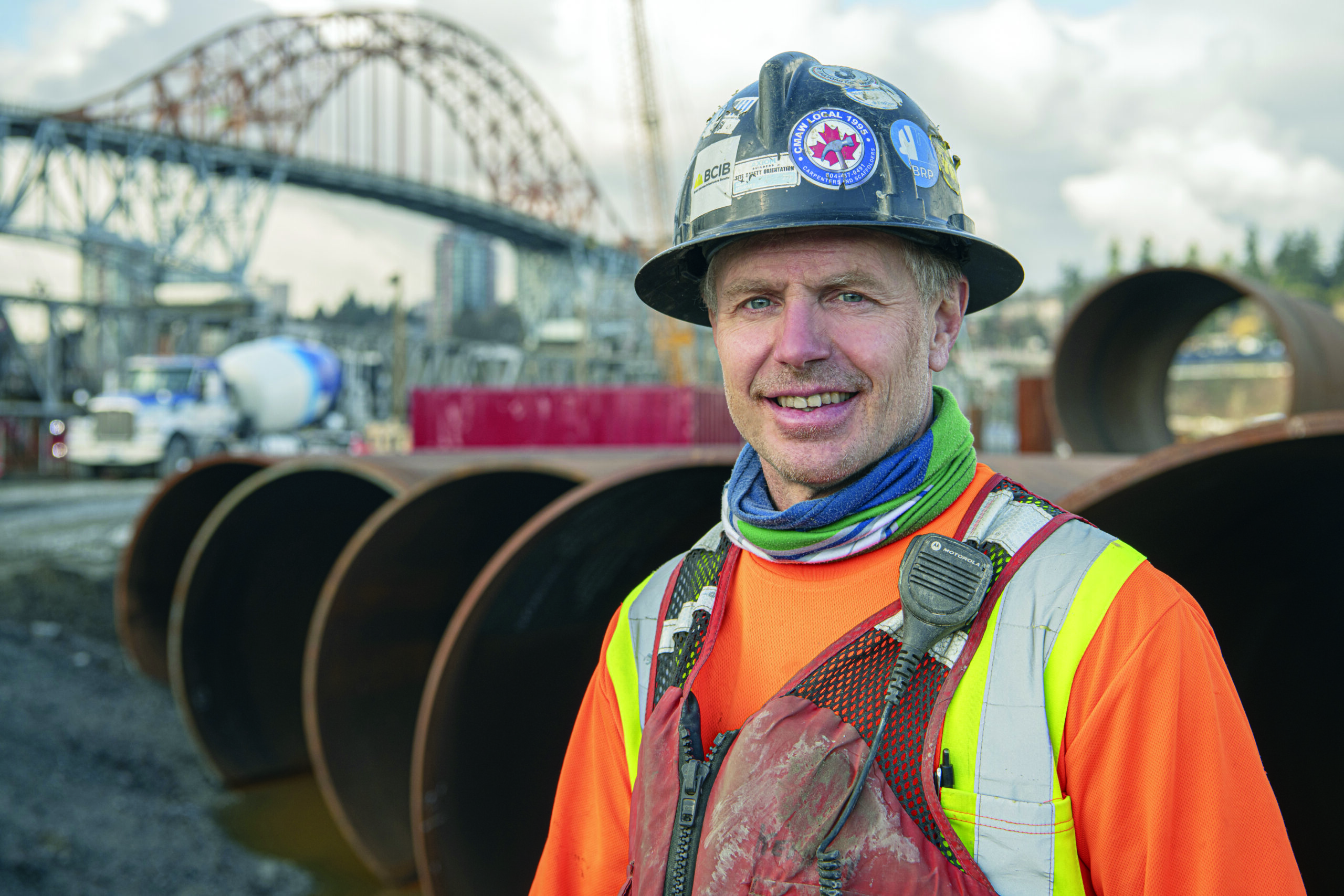 As an association whose members support unionized construction workers, CLR [Construction Labour Relations Association of BC] shares the same goals as BCIB. Namely, attracting and retaining qualified workers, promoting opportunities for apprenticeship development, ensuring healthy and safe working environments, opening up the construction industry to greater diversity, equity and inclusion, and the overall promotion of growth in well-paying union projects and the workers and families they support. CBAs are a vehicle to bring those goals to bear on public infrastructure projects, and CLR is pleased to partner with BCIB in ensuring the success of projects under these agreements.”

It was my target to come to BC because I found that most of the projects in Canada are in BC. To come and work on such a big project is very good for me as someone who immigrated recently.

My new life in Surrey is very much better from my old life. Lebanon is at war, so you can’t look forward to your future. You can dream here in Surrey.”

MOHAMMAD, a Surveyor on the Pattullo Bridge Replacement Project. BCIB worked with the City of Surrey to promote job opportunities for local residents.

It was important for me to find a job with an organization that not only says they’re inclusive and diverse, but backs those claims with actions. It’s one thing to hire a bunch of women and underrepresented people but it’s another to make it a safe place for them. You need to shift the culture beforehand. By supporting me and sponsoring my attendance at conferences such as ‘Tradeswomen Building Bridges’ – that is action.

The next generation needs to see me succeeding so they believe that they’re just as capable. I identify as Two Spirit. And I’ve never met another Two Spirit Indigenous carpenter on-site. So, I feel like I have a responsibility to show others that we are welcome. And we matter.”

BARBARA, a Carpenter Apprentice who has worked on the Pattullo Bridge Replacement Project, is also a member of the Gwa’sala-’Nakwaxda’xw Nations. BCIB helped sponsor them to be a delegate at the Trades Women Building Bridges 2022 conference in London, England.

When I first started on this site, I got teary. It was a bluebird morning and I was overlooking so many magnificent mountains and the clean running river and I got teary, thinking — oh my god I’m home, and working on something that is just so exciting.

I’m home as a local hire at BCIB. It really doesn’t get any better than that. For the last 10 years, I’ve had to work in the north and all over Alberta, and I haven’t been able to work at home, so this is such a gift.”

DAWN, an End Dump Truck Foreperson and First Aid Attendant on the Kicking Horse Canyon Phase 4 project near Golden, BC. She took a leave of absence from her 25-year career to follow her passion for construction and enrolled in a six-month heavy haul program. That was ten years ago.

I spent 13 years working as a welder in various shops without really advancing my career. I found that my career has skyrocketed since joining BCIB. I’m getting opportunities thrown at me very regularly since I joined this project. It feels great. All my hard work, and the constant support of my husband and family, has finally paid off.”

SARAH, a Red Seal Welder with a welding inspector certificate on the Pattullo Bridge Replacement Project, has also served as an Acting Foreperson on the same project. 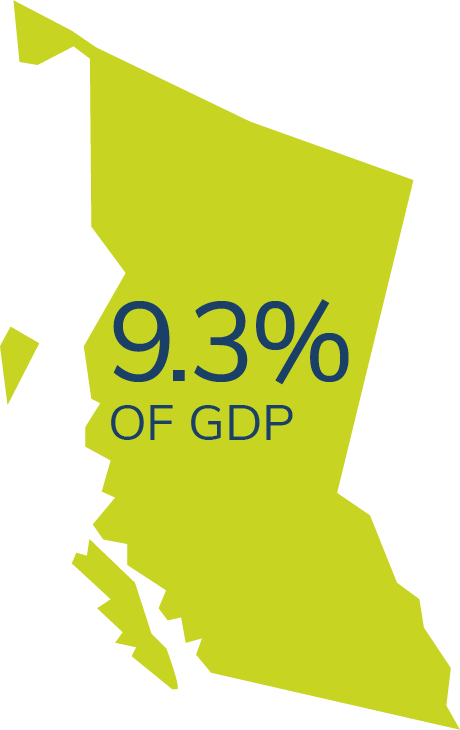 BC’s construction industry has more than doubled since 2001. It now accounts for more than 9% of BC’s GDP and employs nearly a quarter of a million workers. The value of proposed construction projects in BC is $226 billion dollars.2

BCIB APPLICANTS BY THE NUMBERS

of applicants to BCIB have self-identified as a member of an underrepresented group.

of applicants have existing skills in the trades.

of BCIB employees on CBA projects live in BC. 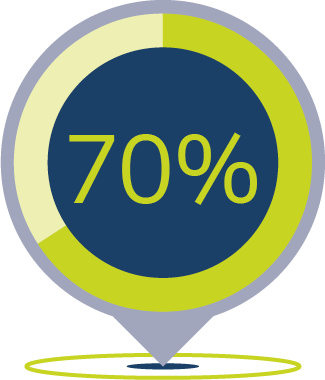 of workers are local hires (living within 100 km of the jobsite).

of CBA workers were women, and they worked 15% of the hours.

of CBA workers were Indigenous tradespeople, working 14% of the hours.

of women on CBA projects get paid the same rate as equally qualified men. In BC, women in the trades earn about 20% less than men.

of skilled tradespeople on CBA projects are from one or more underrepresented groups (Indigenous peoples, locals, women, 2SLGBTQ+ people, and others).

Unionized construction sites have a proven safety track record. For example, a study5 comparing unionized and non-union construction employers in Ontario found that unions have:

4 p. 54, Building a Better BC: Social and Economic Impacts of the Community Benefits Agreement https://www.buildingabetterbc.ca/documents/BuildingaBetterBC_CBA_Report.pdf 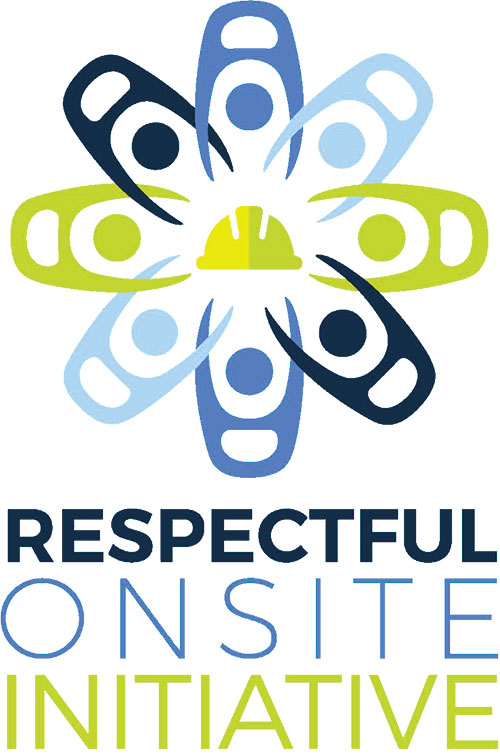 BCIB works with contractors to foster jobsites that are inclusive and respectful of cultural differences. One way we do that is through our Respectful Onsite Initiative (ROI), a suite of training programs including History Matters, BCIB’s Indigenous Cultural Competency Training, and Justice, Equity, Diversity, and Inclusion training.

ROI brings discussions about gender, race, sexism and reconciliation to the jobsite. It makes for more inclusive and safer working environments for all. This training also contributes to the Province’s commitment to the Declaration on the Rights of Indigenous Peoples Act. With the support and participation of government project owners and contractors, all employees participate in this training.

Contractors are invited to participate to help achieve the shared goal of safe and respectful jobsites. This past year, a contractor that had completed work on a CBA project approached BCIB to offer ROI to their workers on non-CBA projects. They did this because they saw the positive impact of the program.

BCIB’s ROI training helps to improve jobsite culture so we can attract and retain the diverse and skilled workforce needed to build British Columbia’s infrastructure today and into the future. 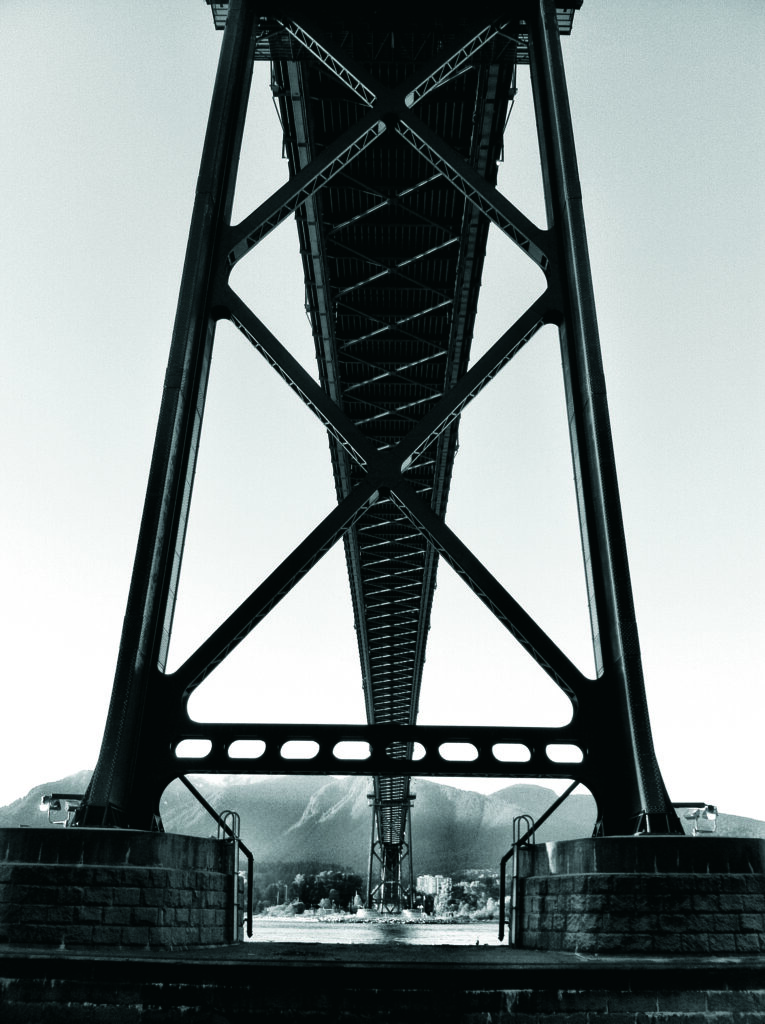 The History Matters learnings filled hidden gaps in my own understanding and education that I hadn’t identified. I’m so grateful for the personal stories the team and elder shared with us, and the reflections we all shared together. All staff should be encouraged and given the opportunity to participate in this phenomenal, foundational training.”

Yesterday’s Respectful Onsite training was very important because it brought the team closer to each other. Today, I’ve had a few of the team members say, ‘Hey, I didn’t know. We didn’t know all of this.’ The training brought some very good light to a lot of people.”

The [Respectful Onsite Initiative] was informative for everyone in our group. It opens your eyes to a different perspective that you may have not seen on a day-to-day basis but other people are dealing with all the time.”

BRAD worked on the Illecillewaet Project as a Project Superintendent with Emil Anderson Construction.